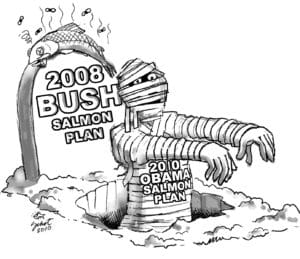 “We’d like to pretend this plan is just a ‘trick’ and the ‘treat’ is still to come,” said Michael Garrity of American Rivers. “But we can’t. We’ve been here too many times before. This administration has got to stop trying to put a pretty costume on an ugly plan and start following the law and science. We’re dealing with people’s livelihoods and keystone species on the brink of extinction.”

Because federal dams are harming threatened and endangered salmon and steelhead in the Columbia and Snake rivers, the law requires federal agencies to create a plan – or biological opinion (BiOp) – to reduce the damage. The papers filed today respond to the Obama administration’s continuing failure to provide legal, science-based plan.

The Western Division of the American Fisheries Society judges the AMIP “inadequate for ensuring the protection of threatened and endangered salmon and steelhead in the Columbia River Basin.”

The Society review found that rather than using a precautionary approach to protecting threatened and endangered salmon and steelhead, the plan “seems to use a precautionary principle to support the 2008 Biological Opinion and defend the status quo.”

Such skepticism of the Obama approach is widespread. “The federal government simply ignored science that didn’t meet its political goals – it ignored science from the AFS, fisheries biologists with the State of Oregon or the Nez Perce Tribe, and its own so-called ‘independent scientists,’” Martin said. “This plan puts the weight of risk on the fish in violation of the law, and the risk is of extinction.”

The Obama plan, according to the coalition’s filing, augments the flawed approaches of the past with new unscientific defects. For example, the Obama plan details the threat climate change poses to salmon, but proposes no new actions to address climate impacts.

Moreover, the Obama administration’s process for adopting the biological opinion has been shrouded in mystery. Legal proceedings have revealed federal agencies’ refusal to release more than 40 percent of the relevant documents.

“The current plan is nothing more than more of the same failed policies of the Bush administration, only with a new cover sheet.” said Zeke Grader, executive director of the Pacific Coast Federation of Fishermen’s Associations (PCFFA), one of the plaintiff groups. “We’re seeing neither good science nor good policy in this plan – just another prescription for failure. More failure just destroys more salmon-dependent jobs.  At-risk salmon-dependent communities have a right to a plan based on science and law, not on politics and denial.”

Briefing on the case will continue through the end of 2010. A hearing before the United States District Court in Oregon isn’t expected until early 2011.

Plaintiffs in this case include a broad range of regional and national conservation groups, fishing associations, and business interests. They are joined by the State of Oregon, the Nez Perce Tribe of Idaho, and the Spokane Tribe of Washington.