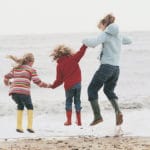 The first grant from the Centralia, Wash, coal-plant transition effort was awarded Tuesday. The Community Action Council of Lewis, Mason & Thurston Counties will receive $727,433 over the next two years to support its weatherization efforts in Lewis County and south Thurston county.

NW Energy Coalition executive director Nancy Hirsh sits on the Weatherization Board, one of the three boards established to invest $55 million in the Centralia area as part of the 2012 agreement between clean energy advocates, labor, the state government and TransAlta to transition Centralia’s power plant off of coal.

“I am excited that the first Centralia Coal Transition grant will put local people to work making residents’ homes safer and more comfortable while reducing residents’ power bills,” Hirsh said. “This is exactly the kind of community support we all envisioned when we negotiated the coal-plant transition.”

Visit the NW Energy Coalition here. You may reach executive director Nancy Hirsh at (206) 621-0094 or at nancy@nwenergy.org.