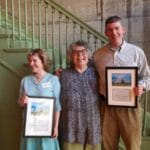 Ransel and Cantrell were instrumental in campaigns – highlighted in a pair of films shown at the event — that have set free the Elwha and White Salmon rivers in Washington. One movie, The Art of Dam Removal, celebrates the activism that led to removal of the Condit Dam on the White Salmon. The other was a clip from the forthcoming Return of the River, which documents the largest dam-removal project in U.S. history: the Elwha dam.

The NW Energy Coalition board annually confers one or more Headwaters Awards to members of the Coalition family who have gone above and beyond in furthering clean and affordable energy. Winners receive a plaque and a vile of water collected from the Columbia River’s headwaters in British Columbia.