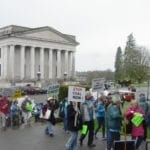 See all photos on a single page and download them here.

A letter to Gov. Chris Gregoire from several groups was publicly released during an outdoor rally near the Tavoli Fountain. Then about 150 people marched to deliver 3,000 postcards to the governor urging rapid phase-out of the plant and wide public involvement in planning the facility’s future.

An indoor forum followed at which speakers addressed the damage being done by the coal plant, the clean energy resources we can use to replace its power and the need to provide just transitions for TransAlta workers and new economic opportunities for the Centralia area.

A dozen or so union Boilermakers – some of whom work at the plant – came to counter-demonstrate but accepted the invitation to attend the forum and raise their concerns … leading to some great discussions and better understanding of everyone’s issues.

The Sierra Club Coal-Free Washington Campaign is planning a series of local town-hall meetings to keep the discussions going.