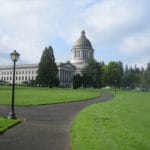 Here’s a quick rundown on bills in which the NW Energy Coalition engaged.

Electric vehicle sales tax fix — HB 2778, with bipartisan leadership from Rep. Jake Fey (D-Tacoma) and Rep. Ed Orcutt (R-Kalama) passed and awaits Gov. Jay Inslee’s signature.  The bill raises the sales tax break eligibility to vehicles costing up to $42,500, which will promote purchases of the forthcoming mid-market cars with 200 miles of range such as the Chevy Bolt, the next generation Nissan Leaf, and the Tesla Model 3, as well as the Chevy Volt plug-in hybrid. The tax break applies to the first $32,000 in vehicle price (a savings of up to about $3,100, depending on the local tax rate) and expires one month after 7,500 vehicles take the incentive, or July 1, 2019, whichever comes first. General Motors and Climate Solutions were instrumental in working this bill.

Colstrip – A broad coalition of energy activists and PSE advocated for SB 6248, that provides an important financing mechanism for decommissioning and cleanup after Colstrip units 1 and 2 are retired. It provides equity to past, current and future PSE customers who’ll be covering the closure-related costs. PSE strongly supported the bill. Gov. Inslee signed the bill after vetoing a section that said PSE couldn’t use the money if the plants close before the end of 2022.

TransAlta tax break – SB 5575 would have given TransAlta, which owns the Centralia coal plant, tax exemptions from 2019 to 2025 for converting the coal plant to burn natural gas or biomass. It failed to pass the House.

Fuel mix reports – With carbon tax Initiative 732 qualifying for the ballot, the Commerce Dept.’s fuel mix disclosure reports became an issue since the proposed tax is based in part on the reports. A trio of bills aimed to eliminate the reports completely or change how the amount of carbon-based energy is reported. None passed.

Adding incremental federal hydro to I-937 – SB 5094, the latest incarnation of a perennial effort to change937’s new renewable standards by counting incremental energy increases from upgrades at existing federal hydropower facilities passed the Senate but not the House.

Adding incremental biomass to I-937 — SB 6166 allows additional electricity from upgrades to old biomass generators to count toward I-937’s renewables standard, even though the facilities in question did not originally qualify as eligible resources under the initiative because they are too old. The governor vetoed this bill.

Building energy benchmarking —HB 1278 would have made the state’s commercial building energy benchmarking program more like Seattle’s, with penalties for non-compliance and Commerce Dept. support. It made it through the House rules committee before falling victim to active opposition from realtors and the Association of Washington Business. We’ll return to this topic in a future legislative session.

Combined heat and power – Rep. Jeff Morris (D-Mount Vernon) again introduced a stripped-down CHP bill, but HB 2345 did not move out of committee.

Appliance efficiency standards —Morris again ran HB 1100, which originally aimed to adopt several appliance standards in place or pending in California. The Senate stripped it down to battery charging systems, but even that version could not survive the end-of-session deal-making.

Water efficiency standards —HB 2430 would have adopted stricter federal and state water efficiency standards in Washington. Toilets, showers and other fixtures meeting these standards are available now in Washington stores. The Coalition supported the bill because of the considerable associated energy savings — water/wastewater systems are major electricity consumers of electricity. It passed the House but was ignored in the Senate.

Building Code Council — The Code Council’s budget and fees have not been adjusted since 1989, and staff layoffs are looming. A bipartisan compromise package, HB 2841, led by Rep. Tana Senn (D-Mercer Island), would have given the Code Council a temporary building permit fee increase in exchange for a stakeholder process to discuss reforms. Even the building industry – which pays the fees — signed on. The House approved the deal, but it couldn’t get heard in the Senate. Attempts to secure additional funding through the budget process were unsuccessful. The governor’s staff continue to explore administrative avenues for funding, however.

Distributed solar incentive – For the fourth year in a row, an attempt to update the renewables program failed to pass. HB 2346 focused narrowly on revising the solar production incentive program and was supported by all stakeholders. But Sen. Doug Ericksen’s (R- Ferndale) Senate energy committee added “poison pill” language in every section to nullify the incentive program if the Department of Ecology were to adopt any clean air rules “or adopts or enforces a rule that sets a limit, cap, or emissions standards to control greenhouse gas emissions.” The House did not act on the bill thereafter.