Skip to content
The Okanagan Nation Alliance and Elizabeth May, MP, honored
The NW Energy Coalition’s Bob Olsen Memorial Conservation Eagle award is presented annually to organizations and individuals that demonstrate sustained and effective leadership in building a clean and affordable energy future.  It is the highest award the NW Energy Coalition (NWEC) can bestow.
This year’s honorees, the Okanagan Nation Alliance and Elizabeth May, Member of Parliament and leader of Canada’s Green Party, received their awards in a ceremony hosted by the Pacific Energy Innovation Association (PEIA) on Wednesday, January 11 at the Musqueam Cultural Centre in Vancouver, BC.
The awards were presented by NW Energy Coalition executive director, Nancy Hirsh, who introduced the recipients. 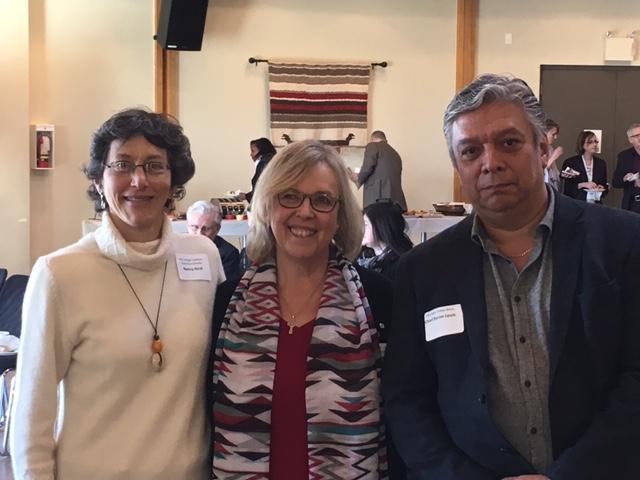 Hirsh cited the Okanagan Nation Allliance for its long-term vision, perseverance and commitment to restoring passage for sockeye salmon returning to the waters of the Okanagan Nation.   Those efforts were described this way in a 2014 article in The Globe and Mail:

“For more than a decade, the Okanagan Nation Alliance has been working with tribes in Washington State, the Department of Fisheries and Oceans and the province of British Columbia to restore the Okanagan sockeye run.  And their success has been so remarkable that calling it a miracle in the desert wouldn’t be much of a stretch.”

In his remarks, Chief Byron Louis of the Okanagan Indian Band, Chiefs Executive Council, who accepted the award on behalf of the Okanagan Nation Alliance, discussed the dire effects on public health, such as the greatly increased prevalence of diabetes, that the loss of salmon populations and other forms of environmental degradation have had on first nation communities.  But, he also noted the successes that have been achieved in restoring salmon populations and emphasized that, as sovereign nations, first nation people are uniquely positioned to lead the fight to preserve our natural heritage and are doing so both in Canada and in the United States.
Elizabeth May, discussed the tatters into which Canada’s environmental review processes have fallen after being progressively weakened during the last decade.  Calling existing processes “a dog’s breakfast of wildly disparate review standards”, that has been corrupted by political interference, May expressed hope, if not confidence, that the integrity of the process, which is now under review by a parliamentary committee, can be restored.
In closing, NWEC executive director Hirsh expressed thanks to Scott Stanners, PEIA president, for hosting the award ceremony and Penny Cochrane, who serves on the boards of both PEIA and the NW Energy Coalition for her dedication to the environmental cause and for organizing the ceremony.