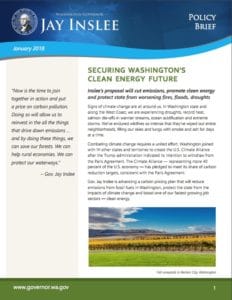 SEATTLE, WA – Washington Governor Jay Inslee has proposed SB 6203, a carbon pricing bill that, if enacted, will over time reduce the state’s dependence on polluting fossil fuels, accelerate the transition to clean and affordable renewable resources, stimulate the state’s already growing clean energy economy, and help ensure that the benefits of the transition are shared broadly among all Washington communities, including those with low incomes and others that may be adversely affected as the state pivots away from fossil fuels.

The bill would initially impose an emissions tax of $20 per metric ton of carbon on major polluters, raising approximately $1.5 billion in revenue in the first two years according to the Governor’s office. The tax would then increase by 3.5% annually over and above the rate of inflation.

Reinvesting the collected funds in projects that advance emissions reductions is a critical component of a successful policy. And the Governor’s bill ensures that significant investment to reduce emissions will occur as a result of this policy.

Half of the funds collected will be used to support key components of Washington’s transition to a clean energy system. Additionally, utilities are entitled to reinvest tax obligations, if they spend these monies directly on emissions reductions in their own service territories. Other investments will go toward the development of residential and utility-scale renewable resources, supporting clean transportation including the installation of vehicle charging stations and the purchase of electric buses, and the expansion of energy efficiency efforts, particularly those that target low-income communities with services such as home weatherization.

Thirty-five percent of the funds will be invested in measures to protect natural resources. This includes repairs and upgrades to the state’s stormwater and flood management infrastructure and improvements in forest management to protect against fires, disease, and other increasingly visible consequences of climate change.

The Governor’s bill could also deliver major economic benefits. After Washingtonians passed I-937, the Energy Independence Act, in 2006, the state experienced an economic boom in which one of the fastest growing sectors was a clean energy economy that created tens of thousands of jobs in the areas of renewable energy and energy efficiency. At the same time the cost for energy to Washington customers actually declined relative to the rest of the nation.

Still, some communities and workers whose livelihoods are closely tied to the fossil fuel industry may be adversely affected by the transition to clean energy. That’s why the remaining fifteen percent of the revenue generated by the Governor’s proposal is earmarked for transition assistance to help those workers and families.

“We believe the Governor’s proposal is well-balanced and might even be strengthened by adjusting the allocation of funds to ensure impacted communities are protected,” said Wendy Gerlitz, policy director of the NW Energy Coalition. “It is long overdue for Washington state to take action to put a price on carbon emissions and not to early to start efforts to mitigate for the impacts of global climate change. The sooner we address these issues through comprehensive state policy, the better.”

Michael Breish, a policy analyst at the NW Energy Coalition, pointed out, “Economists generally agree that carbon pricing is the most economically efficient method of achieving long-term carbon reductions. Combined with a strong renewable portfolio standard and energy efficiency requirements, this bill can be an important part of a very effective clean energy policy portfolio in Washington.”

The NW Energy Coalition congratulates Governor Inslee for his continued leadership on issues of energy and the environment and looks forward to working with him to enact this bill and others in order to shape a clean energy future for Washington.