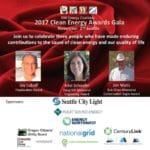 NW Energy Coalition announces 2017 winners of its most prestigious awards

Oct 13, 2017 | Posted by nwenergy | Featured, News |
The NW Energy Coalition is thrilled to announce the 2017 winners of the NW Energy Coalition’s three most prestigious awards.  We hope you can attend the 2017 Clean Energy Awards Gala on the evening of November 2nd at the Seattle Hilton to help us celebrate their achievements.
The Headwaters Award is given to those whose actions best exemplify or serve to further the goals of the NW Energy Coalition.  This year’s winner is Jay Luboff.
Jay Luboff is a veteran green energy advocate, analyst, and innovator.  A founder of the NW Energy Coalition and several other organizations, Jay has worked for over thirty years in the Northwest, California, and elsewhere to green the planet.  He has served as Director of the Washington State Solar Energy Office, as a faculty member and non-profit leader at the Western Resources Institute and Center at the University of Washington, as Senior Policy Analyst for the California Public Utilities Commission, as Manager of Regulatory Policy and Revenue Requirements for green resources and technologies for a major California utility, and for the last nine years as a consultant at Navigant.  In each role, Jay has supported the vision of a peaceful, unpolluted world, based on conservation, renewable resource expansion, and a kind relationship with the Earth.
The Doug Still Memorial Community Organizing Award is give to individuals or organizations for their commitment to directly engaging citizens in taking actin for a clean and affordable energy future.  This year’s winner is Aiko Schaefer.
Aiko Schaefer is a pioneer in forging relationships between environmental organizations, frontline communities including communities of color, and the labor movement on a regional and national scale.  In her role as strategic consultant and coordinator at Front & Centered, a statewide, community-driven coalition that’s working to achieve environmental justice, Aiko is engaging Asian Pacific Islanders, Latinos, African Americans, immigrants and refugees to develop public policy and build a statewide movement for racial, economic, and environmental justice. She is also helping the Alliance for Jobs and Clean Energy in its campaign to reduce carbon pollution in Washington.  Aiko has also served on the faculty at the University of Washington, as a policy advocate at the Washington State Budget & Policy Center, and as founder of the Statewide Poverty Action Network.
The Bob Olsen Memorial Golden Eagle Conservation Award  is given to individuals or organizations that demonstrate the highest standards of leadership for a clean and affordable energy future.  This year’s winner is Jim Walls.
Jim Walls is a leader in helping rural communities embrace and benefit from the economic opportunities presented by the transition to clean, renewable energy.  Since 2002, Jim has served as executive director of the Lake County Resources Initiative in Oregon, which seeks to achieve both environmental and economic prosperity.  Previously, Jim worked for the Natural Resource Conservation Service for 33 years.  He now leads LCRI’s efforts on biomass development, carbon credit systems for forestry, and third party monitoring on the Fremont National Forest and collaborative forest management programs.   Jim also works on geothermal, hydro, solar, and wind energy projects in Lake County.  He has served as an advisor on carbon research projects at the University of Washington and on the Governor’s Renewable Energy Workgroup helping develop policy and legislation for renewable energy in Oregon.
Register Here