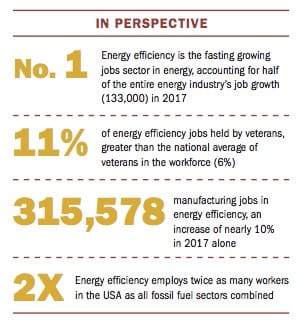 E4The Future and Environmental Entrepreneurs have issued a new analysis that expands on a recent clean energy jobs report by drilling down on the role that energy efficiency jobs play in every state’s economy.

Last May, the Energy Futures Initiative and the National Association of State Energy Officials published the  2018 U.S. Energy and Employment Report and its USEER 2018 State Facts supplement, which found that clean energy industries, including energy efficiency, wind, solar, hydropower, storage, smart grid, micro-grid provide nearly 167,000jobs in the Northwest.  Three-quarters of those jobs are in energy efficiency.

Now, the new “Energy Efficiency Jobs in America” report takes the state-level analysis of energy efficiency jobs many steps further, breaking them down by industry sector, metropolitan area, county, congressional district, and state legislative district.  It also contextualizes the findings of the earlier report by indicating the share of jobs energy efficiency provides in the construction and the energy industries at large.  Finally, the report summarizes the number of energy efficiency businesses in each state broken down by employee count.

The reports help make a compelling case for continued investment in energy efficiency at a time when federal and state EE efforts are under attack.

And in every legislative session, there are state-level efforts to divert energy efficiency funding to other purposes.  That’s why it’s critical that policymakers be educated in the full spectrum of benefits provided by energy efficiency — avoided expenditures for new power plants, reductions in greenhouse gas emissions, improved health and quality of life, and, as this report demonstrates, jobs and commerce.