Unless changes are made, the next regional power plan could drastically underestimate the costs to consumers of the coal-fired electricity now serving the Northwest.

The region’s official power planning agency is developing the 7th Northwest Power and Conservation Plan, which will serve as a guide for choosing the best resources to meet electric needs over the next 20 years. But the regional planning model being used by the Northwest Power and Conservation Council does not fully account for hundreds of millions of dollars in upcoming pollution-reduction costs for coal plants. In fact, the model completely ignores the existence of several coal-fired plants that supply electricity to Northwest families and businesses and are paid for in Northwest customers’ bills.

A just-released NW Energy Coalition issue paper, The True Cost of Coal: Fully accounting for coal-fired electricity use in the 7th Northwest Power and Conservation Plan, bares two shortcomings in the Council’s resource modeling that makes these polluting coal plants look cheaper than they are as a resource to meet the region’s needs.

Council power plans have always ignored many so-called “out-of-region” coal plants that are paid for by Northwest energy consumers. The time has come for the Council to correct this practice. Nine coal plants in Wyoming, Utah, Colorado and Arizona not included in the Council’s regional portfolio model (RPM) currently contribute to meeting Northwest power demand.

Like coal plants throughout the nation, these plants face expensive upgrades to continue operating as environmental/climate regulations come into effect. Customers of Northwest utilities that own or distribute those plants’ power are on the hook for paying a portion of the retrofit costs.

Given the extensive operational, regulatory and policy ties between the “out-of-region” coal plants and the geographic Northwest, and the likelihood of Northwest consumers being saddled with millions or billions of dollars in upgrade costs should they continue to rely on these plants, it’s imperative that the Council reflect these plants’ actual expense to Northwest consumers in the 7th and subsequent power plans.

Even if the Council incorporated those out-of-region plants, would it accurately reflect their likely costs to Northwest billpayers in the 7th Plan? The Council’s current treatment of rising expenses at the coal plants it does consider suggests otherwise.

The Council’s regional portfolio model focuses on only the variable costs associated with the operation of “in-region” coal plants. Capital improvements to meet current and impending new environmental regulations have no bearing on the model’s selection of resources to use in meeting power demand.

Major power plant retrofits and renovations can cost hundreds of millions of dollars. Unless these coal plant-related costs are accounted for, the 7th Power Plan will fall short of its responsibility to properly assess the costs and risks of competing resources.

The Coalition issue paper lists numerous environmental regulations now affecting or that will soon affect the coal plants supplying power to Northwest families and businesses. A look at the effects of just one such regulation – the regional haze rule – reveals that keeping those plants open will require hundreds of millions of dollars of compliance expenses unaccounted for in the Council’s modeling.

Again, all those who consume those plants’ power will cover those expenses in their bills … even if properly incorporating those costs would likely lead to recommending other (and cleaner) resources.

To fulfill its responsibilities to the people and economy of the Northwest, the Council needs to incorporate into its 7th Plan:

The Coalition and allies will urge the Council to take these steps as it completes the draft 7th Plan. Clean energy advocates can help by contacting their Council representatives and by appearing at public hearings on the draft plan to be held in each Northwest state, most likely in November and December. 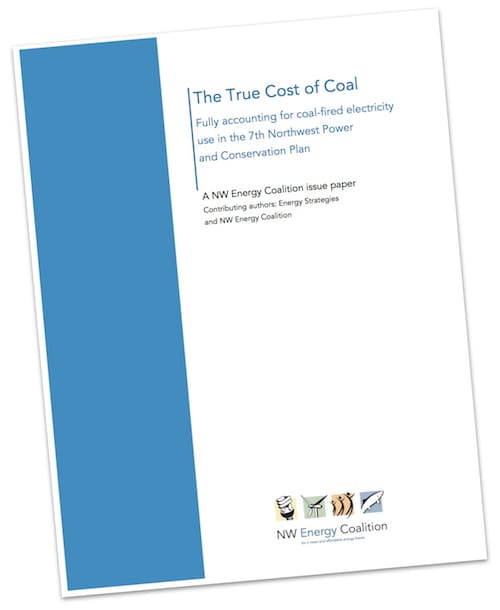 The True Cost of Coal: Fully accounting for coal-fired electricity use in the 7th Northwest Power and Conservation Plan is available here.